A monster movie experience worth paying for 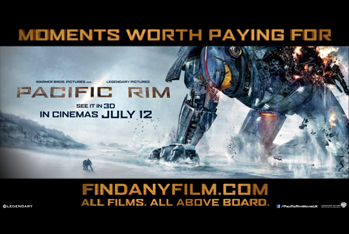 On Friday 3rd May, the Industry Trust for IP Awareness and Warner Bros. Pictures UK will release a unique trailer for the upcoming epic sci-fi action adventure Pacific Rim that promotes the value of a great movie experience.

Running in cinemas, digital, online and social media, the exclusive 30-second trailer celebrates the visual mastery behind the forthcoming blockbuster movie and directs audiences to Findanyfilm.com, a search engine for official film releases, all aboveboard and all in one place.

This fantastic Pacific Rim trailer captures some of the vital ingredients that make a movie experience worth paying for and, at the same time, addresses the continued challenge posed by piracy.

This latest ‘Moments Worth Paying For’ trailer celebrates the skill and creativity behind the finished film as something worth paying for – and what better way to bring that message to life than via the visual thrill-ride on offer in Pacific Rim?

The Industry Trust’s Moments Worth Paying For campaign, launched in November 2010, has since gone from strength to strength. Independent tracking research by ICM in December 2012 revealed that those audiences exposed to the campaign were significantly more likely to pay for official film and TV than those not exposed to it.

From acclaimed filmmaker Guillermo del Toro comes Warner Bros. Pictures and Legendary Pictures Pacific Rim. When legions of monstrous creatures, known as Kaiju, started rising from the sea, a war began that would take millions of lives and consume humanity’s resources for years on end.  To combat the giant Kaiju, a special type of weapon was devised: massive robots, called Jaegers, which are controlled simultaneously by two pilots whose minds are locked in a neural bridge. But even the Jaegers are proving nearly defenseless in the face of the relentless Kaiju. On the verge of defeat, the forces defending mankind have no choice but to turn to two unlikely heroes—a washed up former pilot (Charlie Hunnam) and an untested trainee (Rinko Kikuchi)—who are teamed to drive a legendary but seemingly obsolete Jaeger from the past. Together, they stand as mankind’s last hope against the mounting apocalypse.  The film also stars Idris Elba, Charlie Day and Ron Perlman, as well as Robert Kazinsky, Max Martini, Clifton Collins, Jr., Burn Gorman, Larry Joe Campbell, Brad William Henke and Diego Klattenhoff.

Pacific Rim will be released in UK cinemas on 12th July.