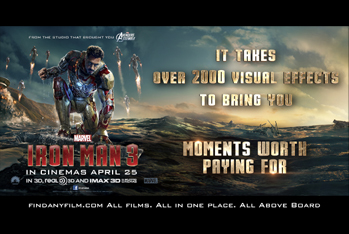 Running in cinemas nationwide over a 4 week period from the 29th March, the exclusive trailer builds on the success of the Industry Trust’s Moments Worth Paying For campaign, which inspires respect for the value of official film, TV and video content. Independent research conducted by ICM shows that exposure to Moments Worth Paying For makes illegal downloaders more than twice as likely to pay for official film, TV and video.

With Iron Man 3 boasting over 2,000 spectacular visual effects jaw-dropping stunt sequences, the new trailer brings to life the technical brilliance that goes into creating a movie experience worth paying for. As well as illustrating technical achievements at the heart of Iron Man 3, the trailer highlights the many official ways of watching films and TV shows in the UK by directing viewers to FindAnyFilm.com

We’re delighted to be working with Walt Disney on the latest film in the Marvel franchise. The continued support of Disney and all the Trust’s member organisations from across exhibition, distribution and retail, plays a vital role in the ongoing success of the industry’s Moments Worth Paying For campaign. The enormous fan following for IRON MAN 3 will help ensure that our work to inspire and inform film fans about the value of movie moments and the wealth of official film, TV and video services available reaches audiences right across the country. With support from partnerships with Clear Channel, DCM and Pearl and Dean we’re able to ensure the campaign not only has reach but also scale.

Marvel film and comic fans completely understand the time and effort that goes into turning the stories they love into full length feature films as is the case with Iron Man 3. At Disney, we’re committed to supporting consumer awareness campaigns to tackle copyright infringement, so we’re delighted to be working with the Industry Trust to inspire audiences about the value of film and showcase the technical wizardry involved in making the movie moments film fans love.

The Moments Worth Paying For campaign has been embraced by cinema audiences, delivering real impact in shifting attitudes to piracy, as independent tracking research shows. This industry initiative is unique in its flexibility – by collaborating on a range of new releases across the year and delivering across multiple media channels all stakeholders in the industry are able to play a part. At Pearl and Dean, we’re proud to support our film and exhibition partners in tackling the challenge of piracy by carrying the trailers in cinema.

Iron Man 3 will be released in cinemas nationwide on 25th APRIL 2013. Associated Moments Worth Paying For activity will run in cinema, outdoor and online.