Supervillain Gru and his hilarious yellow sidekicks are back, as brand-new content from Illumination and Universal Pictures’ Minions: The Rise of Gru is released today, just in time for the Summer, when the mischievous Minions return to cinemas once again. 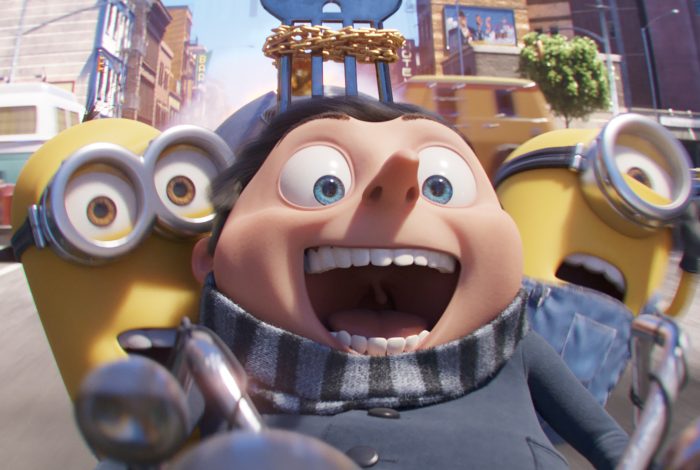 The exclusive new content is being shared as part of the Industry Trust’s Moments Worth Paying For campaign, which reminds audiences of the magic of watching films first on the big screen.

The sneak-peek was created featuring exclusive, never-before-seen moments from the film, jam-packed with Minion mayhem and everyone’s favourite supervillain, Gru voiced by the inimitable Steve Carell.

Watch the Minions misbehave as only they can, from Kevin hanging on to a tram for dear life and new character Otto pedalling an out-of-control bike through a lake – Minions: The Rise of Gru is another perfectly despicable adventure for all ages to enjoy on the big screen.

Long before he becomes the master of evil, Gru (Oscar® nominee Steve Carell) is just a 12-year-old boy in 1970s suburbia, plotting to take over the world from his basement. When the infamous supervillain supergroup, the Vicious 6, oust their leader, Gru interviews to become their newest member, but instead finds himself the mortal enemy of the apex of evil. With Gru on the run, the Minions attempt to master the art of kung fu to save him, and Gru discovers that even bad guys need a little help from their friends.

Rob Huber, Managing Director, Universal Pictures International UK + Eire Limited, said: “We are proud to partner with the Industry Trust again in 2022 on this newest evolution of their Moments Worth Paying For Campaign. Gru and the Minions are loved by audiences young and old, so this is a perfect title to connect with those who understand the value of choosing a legal route to watch their favourite characters on the big screen.”

Liz Bales, Chief Executive, The Industry Trust for IP Awareness, said: “‘Minions: The Rise of Gru’ is the perfect title for our next Moments Worth Paying For collaboration, which celebrates the unique magic of the movie-going experience as the best place to watch films first. We’re delighted to partner with Universal Pictures UK + EIRE once again on the next instalment of such an iconic and successful family franchise.”

Like the others in the Moments Worth Paying For series, this piece directs audiences to, FindAnyFilm.com, which gives users the many ways to book, buy and watch all their favourite films & TV shows.

Minions: The Rise of Gru – In Cinemas July 1