FINDANYFILM Presents a Shaun The Sheep Moment Worth Paying For 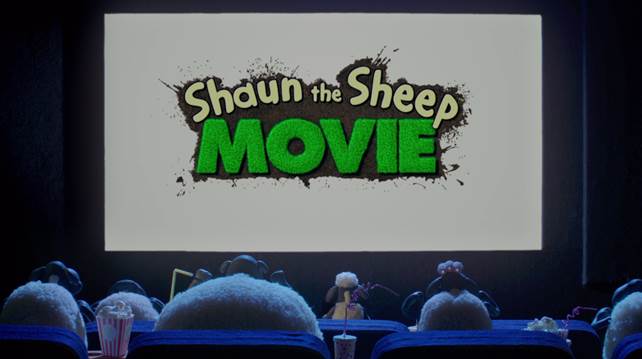 – Features 100% original Shaun the Sheep content
– First trailer to entertain and educate about the importance of legal content across all formats
– Encourages audiences to visit FindAnyFilm and choose official content.

On Friday 9th January 2015 The Industry Trust for IP Awareness and STUDIOCANAL will launch an exclusive SHAUN THE SHEEP trailer that sees Shaun and his flock championing the value of film across all formats, encouraging that these moments are worth paying for.
The bespoke piece is exciting progress in the Moments Worth Paying For campaign, being only the second trailer in the series to feature 100 per cent original content and the first to overtly promote all formats. Part of a comprehensive media plan, the campaign will be supported by activity across digital, PR, social media and outdoor space, and is yet another example of how The Industry Trust adopts an integrated multi-media approach to amplify reach and influence as part of its successful consumer education programme.

Produced by the multi award winning Aardman Animations, the world’s most famous sheep has continued to charm television audiences all over the world and now takes to the big screen with Shaun the Sheep The Movie set for release 6th February. The trailer has been exclusively animated to show Shaun using Find Any Film to search for cinema times and buy tickets. The trailer continues to deliver the key message encouraging audiences that whether you are “at home”, “on the move” or “best of all in the cinema” that “real experiences are worth paying for”.

STUDIOCANAL played a pivotal role in securing support from Aardman and directors to provide original content and messaging to encourage respect for the value of official film, TV and video content. The trailer also directs audiences to find more moments worth paying for at FindAnyFilm.com; a search engine for official films.

“Shaun The Sheep The Movie” trailer is the latest release in The Industry Trust’s Moments Worth Paying For campaign. Launched in November 2010, the campaign has since gone from strength to strength. Independent tracking research by ICM revealed that those audiences exposed to the campaign were significantly more likely to pay for official film and TV than those not exposed to it.

Liz Bales, Director General at Industry Trust for IP Awareness said: “We are delighted that STUDIOCANAL have become members of The Industry Trust and are supporting the copyright education. It’s been marvellous working with them, along with Aardman Studios, who have both shown incredible support of our message through the creation of this bespoke Shaun the Sheep Movie trailer. By creating a trailer that is completely bespoke, we are able to deliver anti-piracy messaging that is both charming and educating in which audiences are more likely to engage.”

John Trafford-Owen, Head of Theatrical Distribution at STUDIOCANAL said: “This is our first collaboration with The Industry Trust and we are thrilled to be a part of the fantastic work they do for film piracy on behalf of the UK film and TV industry. We are extremely proud to have produced and provided such an exclusive “Moments Worth Paying For” message that covers all formats, whilst also promoting the film. Shaun The Sheep is a well-loved and known character all over the world and we hope this trailer will further support the tremendously successful work of The Industry Trust .”

Shaun the Sheep The Movie sees Shaun’s mischief inadvertently lead to the Farmer being taken away from the farm. Shaun, Bitzer and the Flock have to go to the big city to rescue him, setting the stage for an epic and hilarious big screen adventure.

Shaun the Sheep The Movie opens in UK Cinemas across the country 6 February 2015. Associated Moments Worth Paying For activity will run in cinema, outdoor and online.