Leading music site Gigwise has partnered with the Industry Trust for IP Awareness and its FindAnyFilm.com search tool as part of a site relaunch that includes a renewed focus on film alongside traditional music content. 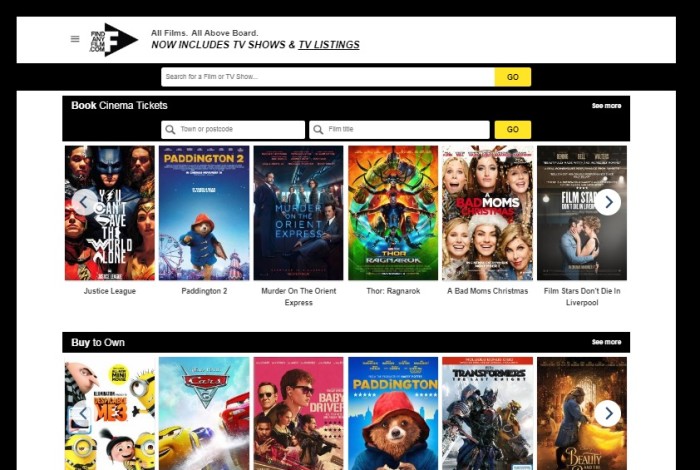 Leading music site Gigwise has partnered with the Industry Trust for IP Awareness and its FindAnyFilm.com search tool as part of a site relaunch that includes a renewed focus on film alongside traditional music content.

The partnership means that as well as a raft of new entertainment editorial, users will be able to access FindAnyFilm.com within the Gigwise site to quickly and easily locate all legal methods of consuming more than 122,000 films and TV shows across all formats, from cinema to DVD, as well as digital download, rental and streaming options. The partnership is part of a broader step-change at Gigwise which has also seen the site join forces with Blonde To Black Pictures to bolster ties with the independent entertainment sector.

Niall Green, Director at Gigwise said: “Our new FILM tab and our partnerships with FindAnyFilm.com and Blonde To Black Pictures have been a joy to piece together. On one side we have a direct link to purchase across a huge range of films and TV shows which for me, is a direct shot at copyright infringement and the ongoing fight against it. On the other hand working with Blonde To Black, their opinions and portfolio of work, will give us added editorial depth thanks to their tight grip on the independent scene.”

Talking about the broader partnership, Sadie Frost, co-founder of Blonde To Black Pictures added: “This is a unique opportunity for Gigwise and Blonde To Black to align editorial with a direct route to legal consumption of our and other artist’s work. We’re always looking for new and exciting ways to direct audiences to the best quality versions of any artistic output and the pairing with FindAnyFilm.com just feels like the best way of doing that.”

Liz Bales Chief Executive at the Industry Trust for IP Awareness, said: “We’re extremely excited to be partnering with Gigwise, with the prospect of introducing FindAnyFilm.com to a whole new younger audience. With the continued rise of mobile it was important that FindAnyFilm worked seamlessly within Gigwise’s newly designed platform and film tab and I look forward to it being an integral part of Gigwise’s latest venture into film journalism. With Find Any Film’s extensive database, users have the ability to watch whatever they want through legal sources; whether that be an episode of Peaky Blinders that aired a few days ago or Baby Driver that’s just been released on DVD/BD.”