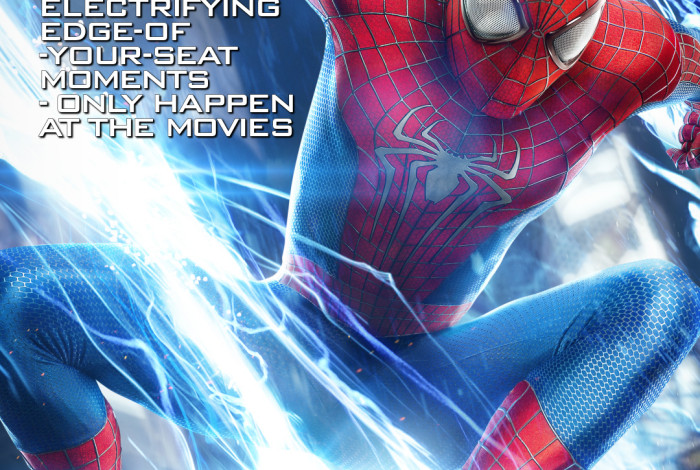 On Friday 28th February The Industry Trust for IP Awareness and Sony Pictures Releasing UK will launch an exclusive THE AMAZING SPIDER-MAN 2 trailer that sees Spider-Man pitted against new foe Electro.
Spider-Man’s most important battle has been within himself: the struggle between the ordinary obligations of Peter Parker and the extraordinary responsibilities of Spider-Man. In this latest education trailer scenes of Spider-Man in action serve as a reminder to audiences of the great entertainment and emotional value they get from film. With Marvel titles appealing to the core 16-34 male audience target, of which those who are exposed to the Moments Worth Paying For campaign are twice as likely to pay for content (ICM December 2013).

Sony Pictures Releasing UK secured exclusive film footage to ensure Spider-Man continues to take audiences on the inspirational journey to choose official film, TV and video content. The action packed THE AMAZING SPIDER-MAN 2 highlights the wonderful value of film, TV and video content and directs to FindAnyFilm.com, encouraging audiences to re-live those “drop-the-popcorn moments” of everyone’s favourite super-hero, Spider-Man.
To amplify the reach and influence of the trailer, the Industry Trust will implement its successful integrated multi-media approach across cinema, digital, PR, social media and outdoor to complement the THE AMAZING SPIDER-MAN 2 marketing strategy.
Liz Bales, Director General at Industry Trust for IP Awareness said: “THE AMAZING SPIDER-MAN 2 has wide audience appeal, similar to our previous Marvel execution which performed well for the target audience, making it the perfect choice for the next instalment of the campaign. With each trailer execution delivering more traction and success for the campaign it’s key that this momentum continues. We’re delighted to have partnered for the first time with Sony Pictures Releasing UK on one of the tent pole releases for 2014. Through the thrilling scenes of Spider-Man and the additional support of the Sony Pictures Releasing UK team we’re able to continue to increase awareness of the huge range of legal services that are available through FindAnyFilm.com, helping to continue to reduce audience engagement with infringing content.”
Peter Taylor, Managing Director, Sony Pictures Releasing UK said: “We have been working with the Industry Trust since it was created – almost ten years ago. This is the first time we’ve collaborated on an exclusive trailer for the influential Moments Worth Paying For campaign and we’re excited that Spider-Man is taking our audience on this journey. Consumer Education campaign’s such as Moments Worth Paying For have proven success in supporting the sector and reducing the impact of piracy. Sony is committed to tackling the key drivers to copyright infringement and working with the Trust is the perfect way to deliver on that objective. Securing support from the Director, Marc Webb – adds further weight to the argument around the value of film, helping audiences to put the message into context.”
Marc Webb, Director THE AMAZING SPIDER-MAN 2 said: “Working on Spider-Man brought an opportunity for every single person involved in the film to work on something complex and challenging and ultimately something we all took a great deal of pride in. The ‘Moments Worth Paying For’ campaign – which we’re very happy to be partnering with – is a fantastic way that we can enlighten film lovers, by helping them to experience the levels of work and creativity that go into bringing them the movies they love.”
It’s great to be Spider-Man (Andrew Garfield). For Peter Parker, there’s no feeling quite like swinging between skyscrapers, embracing being the hero, and spending time with Gwen (Emma Stone). But being Spider-Man comes at a price: only Spider-Man can protect his fellow New Yorkers from the formidable villains that threaten the city. With the emergence of Electro (Jamie Foxx), Peter must confront a foe far more powerful than he. And as his old friend, Harry Osborn (Dane DeHaan), returns, Peter comes to realize that all of his enemies have one thing in common: OsCorp. Directed by Marc Webb. Produced by Avi Arad and Matt Tolmach. Screen Story and Screenplay by Alex Kurtzman & Roberto Orci & Jeff Pinkner. Based on the Marvel Comic Book by Stan Lee and Steve Ditko.
THE AMAZING SPIDER-MAN 2 opens in cinemas nationwide on April 18th 2014. Associated Moments Worth Paying For activity will run in cinema, outdoor and online.