INDUSTRY TRUST AND WARNER BROS. PICTURES UK LAUNCH THE 10th MOMENTS WORTH PAYING FOR TRAILER WITH “THE LEGO® MOVIE”

On 29th November, the Industry Trust for IP Awareness and Warner Bros. Pictures UK will team up to launch an exclusive trailer for The LEGO® Movie, which details the many ingredients that go into making a movie experience worth paying for. 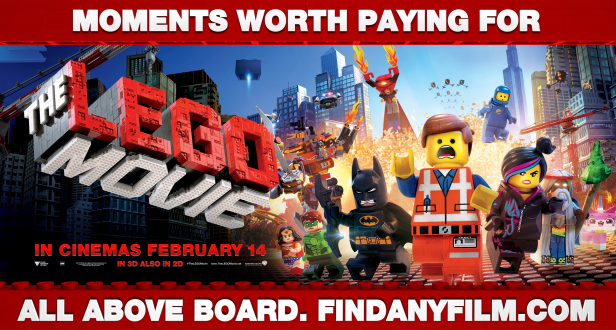 LEGO trailer - Moments Worth Paying For

Running across UK and Irish cinemas, digital, outdoor and social media for three months, the 30-second trailer is the 10th in the Industry Trust’s successful Moments Worth Paying For campaign and the second Warner Bros. collaboration this year after a bespoke version for Pacific Rim debuted in May.  This established campaign continues to have a substantial impact on audiences. Independent tracking research by ICM in August 2013 revealed that those audiences exposed to the campaign were significantly more likely to pay for official film and TV than those not exposed to it.

This bespoke The LEGO Movie trailer shines a light on the thousands of dedicated professionals responsible for bringing this animated feature film to life, not to mention the many millions of LEGO® bricks required too, all in an effort to inspire audiences to respect and value official film content.

The trailer also directs audiences to FindAnyFilm.com, a search engine for all films, all above board, in every format available. As new industry research[1] shows that previous digital ‘late adopters,’ including parents and older generations are starting to engage in infringing behaviour as they migrate their film viewing online, the trailer aims to show them how easy it is to access the film from official sources.

Liz Bales, Director General at Industry Trust for IP Awareness said: “We’re delighted to be working with Warner Bros. Pictures UK again as we continue to evolve and refine our Moments Worth Paying For campaign. It’s great to work on a title that reaches both young people and parents – two audience groups that are very important to us as they continue to migrate online. It’s crucial that the film industry is connecting them with legal services, making it easy to choose to pay for official content and less likely that they would inadvertently or intentionally access pirate websites.”

Josh Berger, President & Managing Director, Warner Bros. UK, Ireland & Spain said: “We’re pleased  to be continuing our work with The Industry Trust on educating audiences on the value of creative content. A great deal of work has gone into making The LEGO Movie, so it’s great to be able to highlight this in the trailer whilst engaging young people and parents alike.”

The LEGO® Movie is the first-ever, full-length theatrical LEGO® adventure. Directed by Phil Lord & Christopher Miller (21 Jump Street, Cloudy with a Chance of Meatballs), The LEGO Movie stars Chris Pratt, Will Ferrell, Elizabeth Banks, Will Arnett, Nick Offerman, Alison Brie and Charlie Day, with Liam Neeson and Morgan Freeman. The original 3D computer animated story follows Emmet, an ordinary, rules-following, perfectly average LEGO minifigure who is mistakenly identified as the most extraordinary person and the key to saving the world.  He is drafted into a fellowship of strangers on an epic quest to stop an evil tyrant, a journey for which Emmet is hopelessly and hilariously underprepared.

The LEGO Movie will be released in UK cinemas on 14th February 2014.

LEGO, the LEGO logo, the minifigure and the brick and knob configuration are trademarks of The LEGO Group. ©2013 The LEGO Group. Used with permission.  All rights reserved.

For more information please contact David Whitehead or Claire Lundie on: 0207 260 2700 or at: industrytrust@bluerubicon.com

FindAnyFilm.com is one of the UK’s leading data services for film fans looking to watch, buy, download, stream or rent legitimate film. Operated by the Industry Trust for IP Awareness, the website offers 40,000 films across all formats, from cinema to DVD and Blu-ray, as well as download and streaming digital (or on demand) services. Visitors can search by title and / or talent, and can sort their results by format and price. The original website has been evolved and now includes an API open to all, a cinema booking app available to all UK distributors and javascript links to purchase which can be embedded in film news and reviews content across the web. Whilst the original website has been updated to reflect new formats, an array of tools have been developed to further the reach of the data – including an open API, a CMS based cinema booking app available to all UK distributors and dynamic buttons linking online film review and articles to points of purchase.