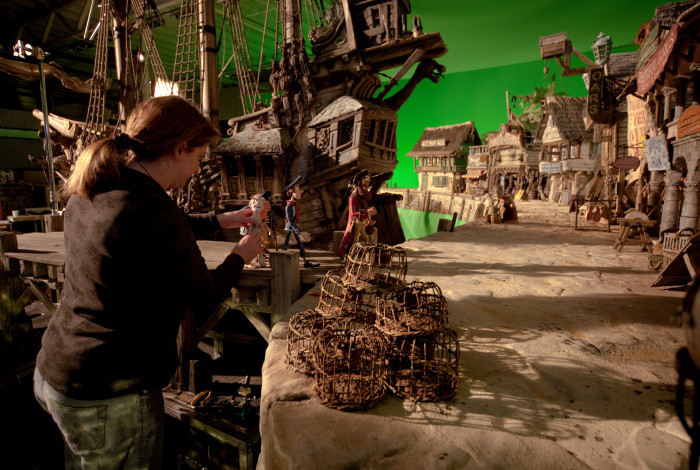 5th March 2014:  A new copyright focussed teaching resource has been launched today aimed at engaging thousands of young people across the UK to build awareness and understanding of Intellectual Property.

Created by new UK-wide film learning programme Into Film and the Industry Trust for IP Awareness, Creating Movie Magic is a powerful, innovative and wide-reaching copyright education resource, which uses film as a memorable teaching tool. The resource encourages students to use Design and Technology skills to explore and help young people to take positive and legal decisions when accessing and watching films.  Through the resource students will also get an opportunity to put their new knowledge into a storyboard competition launched with Aardman Animations.

The resource is the first project in the new collaboration between film and education charity Into Film, which aims to put film at the heart of children and young people’s learning, contributing to their educational, cultural, creative and personal development, and the Industry Trust for IP Awareness, the leading body championing respect for copyright.  Creating Movie Magic has been designed in collaboration with National Schools Partnership, and is supported by Cinema First and the Intellectual Property Office (IPO).

Copyright is examined by turning young people from audience to creators in this new curriculum linked resource by exploring the special effects skills used in the creative industries to build an understanding and appreciation for the value of creativity and the importance of protecting this through securing Intellectual Property rights. Aimed at Design and Technology, Art, Film and Media Studies teachers, and produced for 11 – 14 year old students, the free resource pack (hosted on www.IntoFilm.org/creating-movie-magic) will examine the skilled and intricate process of filmmaking, at each stage championing the positive role copyright plays in protecting the future of film, and the creative work of those involved.

Activities in the resource bring the magic of film into the classroom, showcasing the creativity, innovation and design involved in filmmaking. It explores stop motion, false perspective and other creative skills while giving young people the chance to create their own magic movie moments – also equipping them with skills they can use in other lessons, and demonstrating how design and technology skills can lead to a range of career opportunities. Students will learn to create their own basic visual effects, experiment with ideas, materials, technologies and techniques, allowing them to become filmmakers and IP owners, in activities that take their inspiration from famous movies of the 21st Century. The resource introduces students to behind-the-scenes roles of the film industry, looking at the many skilled jobs that make special effects possible in film and linking industry careers to students’ own Design and Technology skills.

They will also explore the value of Intellectual Property – an integral part of the Design and Technology currently receiving little recognition – and the ways in which they can access and enjoy film legitimately. Throughout the sessions, participants will be given the time and an open environment to discuss film piracy in an open, honest and informal manner.

In addition, participating young people will be able to showcase their filmmaking skills and the knowledge they’ve learned during the programme by entering a major new creative competition with Academy award-winning studio Aardman Animations – the makers behind Wallace and Gromit – enabling participants to develop, display and discuss their talents.

Students will have the chance to take what they’ve learnt from the resource and put their ideas to paper and come up with an original storyboard idea that will inspire young people to respect creative content and encourage them to view film through legal channels. Aardman Animations will produce a 35-second film inspired by the winning storyboard, which will then be screened to hundreds of thousands of young people in cinemas across the UK at the Into Film Festival 2014.  The winners will also pay Aardman Animations a visit at their studios in Bristol to find out how the short film was made.

Designed to scaffold students’ learning and develop their awareness of the economic, ethical and social dimensions of design, the free resource has cross-curricular links to numeracy, literacy and ICT throughout and includes:

“This outstanding resource enables you to really expand your Design curriculum and creates independent learners who understand, create and protect real movie magic! It offers inspiring and challenging opportunities for students to stretch their knowledge of the creative industries and attain impressive skills, for both school and their futures.” KS3 – DT teacher – Martin Grant-Hudson, KS3 – DT teacher

Jane Fletcher, Director of Education at Into Film says: “Into film is delighted to partner with Industry Trust on the Creating Movie Magic resource – the first project in our three-year programme to educate and engage young people about film copyright. Through the Into Film young people are already enjoying watching and learning through a wide range of films and events, and this resource will take it to the next level and give them a more in depth understanding of what goes on behind the scenes and why respecting Intellectual Property is so important – and how this supports the future of the film industry. We are also delighted to partner with Aardman Animations to offer participants a fantastic competition – we hope that the resource will inspire young people to create stories of their own and look forward to seeing the results.”

Liz Bales, Director-General of the Industry Trust for IP Awareness, also welcomed the joining of forces: “With years’ of insight from designing and delivering IP education programmes, we are confident Creating Movie Magic will be an engaging, heavy-weight learning resource for teachers and students, one which brings to life the role and value of intellectual property in an innovative learning experience and fulfils curriculum requirements. IP plays a major part in the UK economy, it is the foundation of our creative industries and underpins the array of career opportunities they offer to young British talent. The learning resource fuses the rationale for intellectual property with some practical applications providing students with a real life creative experience.”

David Sproxton, co-founder and Executive Chairman, Aardman Animations said:  “Aardman are proud to be associated with Creating Movie Magic, a Design and Technology resource for teachers, enabling them to harness the power of film to engage young people in the value of Intellectual Property Rights to design and creativity. This resource will bring filmmaking secrets to life, teaching students the basics of animation and use of the camera in a way that we hope teachers and students alike will enjoy, to enhance their experience of Design and Technology.”

Into Film is a UK-wide education charity, which puts film at the heart of children and young people’s learning, contributing to their cultural, creative and personal development. Its UK-wide programme of learning through and about film provides 5-19 year olds with unparalleled opportunities to see, think, make and imagine. Free for state funded schools and non-school settings, such as youth clubs, cinemas and libraries, film clubs are one of the major strands of Into Film, enabling children and young people to watch, discuss and review thousands of films as well offering the professional training and resources to help them make their own.

Supported by the British Film Institute, together with funding from the film industry and a number of other sources, Into Film incorporates the legacy and staff of two leading film education charities, FILMCLUB and First Light, building on their experience and success in delivering programmes of significant scale and reach to children and young people across the UK.

To download free resources and for further information about Into Film or starting a free film club visit: www.IntoFilm.org

The BFI is investing £26m of Lottery funding over four years for Into Film to deliver a bold and visionary new film education programme, available to every 5-19 year-old and the 26,700 schools in the UK. The BFI’s aim is to create a single unified programme for watching, making and learning about film in order to safeguard and boost future film audiences through learning and appreciation of film and stimulate a new generation of filmmakers and film talent.

The BFI is the lead body for film in the UK with the ambition to create a flourishing film environment in which innovation, opportunity and creativity can thrive by:

Aardman, based in Bristol (UK) co-founded and run by Peter Lord and David Sproxton, is a world leader in animation. It produces feature films, television series, television commercials and digital entertainment for both the domestic and international market. Their multi-award winning productions are novel, entertaining, brilliantly characterised and full of charm that reflects the unique talent, energy and personal commitment of the very special people who make up the Aardman team. The studio’s work is often imitated and yet the company continues to lead the field producing a rare brand of visually stunning and amusing independent and commercials productions www.aardman.com