“THE SWEENEY” PROMISES MOMENTS WORTH PAYING FOR

From Friday 27th July film fans will be on the edge of their seats as RAY WINSTONE and BEN DREW star in an arresting trailer to celebrate the value of original film content. 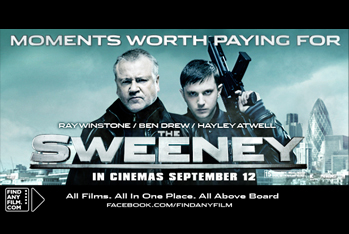 The action-packed trailer features scenes of London’s notorious Flying Squad racing around the capital in a fast-paced battle against armed robbery.  The highly anticipated Entertainment One film, THE SWEENEY, released in cinemas 12th September, demonstrates the heart-stopping suspense audiences will experience on the big screen.

Industry Trust for IP Awareness have recruited THE SWEENEY to help them in their on-going ‘Moments Worth Paying For’ campaign. But rather than the hard-hitting flying squad approach featured in the film, the campaign aims to inspire support for UK TV, film and video industries by celebrating unmissable movie moments and the positive emotional effect that these have on the viewer.

As the unyielding squad within the Met Police fight fire with fire against London’s most violent criminals, clips of audience reactions from the original ‘Moments Worth Paying For’ campaign are interspersed to further remind audiences of the value of the film experience.

The 35-second trailer will be shown in all cinemas for an 8 week period, as well as supportive posters in outdoor locations. The campaign will also highlight the wealth of legitimate ways to watch film and TV by directing viewers to Findanyfilm.com – where film fans can find all films, all above board, all in one place.

Establishing a firm and engaging connection between paying for great content and the pipeline of future releases has never been more important. We are very excited about our collaboration with the Industry Trust on The Sweeney, which will help one of our key films of 2012 reach the audiences it deserves.

We are delighted to welcome Entertainment One to the fold. Informing and inspiring audiences is at the heart of what we do, and Entertainment One reaches audiences of all ages, interests and backgrounds. Young men index higher than any other group in taking part in illegal downloading and so we are hoping to inspire them with a truly great piece of British filmmaking in The Sweeney, with this bespoke cinema trailer celebrating film moments worth paying for. 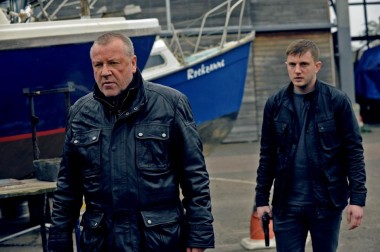 FindAnyFilm.com is one of the UK’s leading websites for film fans looking to watch, buy, download or rent great films. The site is supported by advertising revenue making this unique service free of charge for users, so they can find any film across six different formats including cinema, TV, DVD, downloads and Blu-ray. FindAnyFilm.com aims to give the best possible movie experience, promoting every type of film that’s available for viewing in the UK. The site works with the BFI, the Industry Trust, and exhibitors, distributors and retailers, to promote legally available films – making high-quality, legal viewing a top priority. The site is also committed to becoming the UK’s most comprehensive film-watching search engine, with an ever-increasing number of titles and a wide choice of reputable retailers. FindAnyFilm.com, all films, all above board, all in one place.