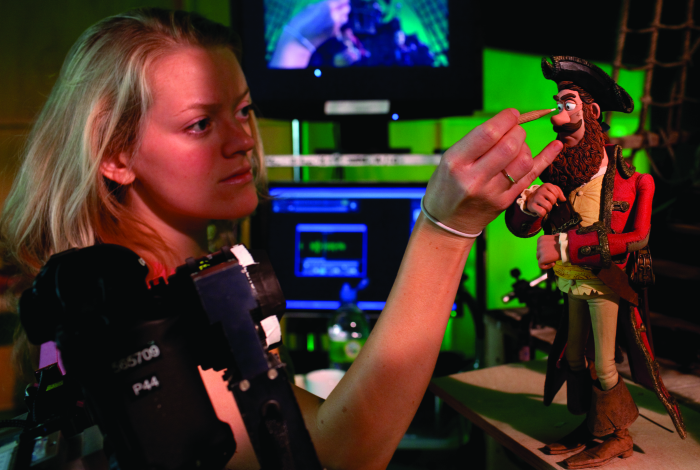 7 November 2014: 13-year-old Hannah Mason from Wiltshire has scooped the top prize in a national storyboarding competition hosted by the film and education charity Into Film, the Intellectual Property Office and the Industry Trust for IP Awareness, which saw her story made into short animated film by Oscar®-winning studio Aardman Animations.

The charity, which enables young people to learn through and about film and is supported by the BFI through Lottery funding, invited schoolchildren across the UK to put their creative skills to the test for the once-in-a-lifetime chance to get their idea developed into a short film by Aardman, the makers of Wallace & Gromit and Chicken Run, as part of an innovative Design and Technology teaching resource ’Creating Movie Magic’. The competition under-pinned a resource to teach young people about the value and importance of copyright to creativity, encouraging them to view film legitimately through ‘above board’ channels, which can be found via www.FindAnyFilm.com. The resource was designed to fit into the D&T curriculum and taught young people stop-motion animation, about careers available in the UK film industry, and tasked young people to create a pro-copyright animated storyboard to raise the issue of copyright with young people.

The teenager who attends Avon Valley College in Salisbury, submitted her winning idea ‘Zombie Fairy’ – which shows the craft and graft that goes into film-making to encourage people to support the UK film industry – and has seen the story turned into a short animated film made by the award-winning studio. The 30-second film will be screened to hundreds of thousands of young people at over 2,700 screenings and events this November as part of the Into Film Festival, which takes place across the breadth of the UK. The festival enables young people aged 5-19 to learn through and about film, interact with filmmakers and explore filmmaking, promoting traditional and visual literacy and encourage critical thinking.

As a part of the winning prize, the winner also received an all-expenses-paid trip along with classmates, to the Aardman studio in Bristol – the home of Wallace & Gromit, Morph and Shaun the Sheep – to have an exclusive meeting with the Aardman production team about bringing their winning storyboard to life. The winner and friends also got an exclusive behind-the-scenes tour of the studio, which is currently in production on Shaun the Sheep The Movie, which is set for a UK theatrical release in February 2015.

Into Film – supported by the BFI with Lottery funding, together with funding from the film industry and a number of other sources – incorporates the legacy and staff of two leading film education charities, FILMCLUB and First Light, building on their experience and success in delivering programmes of significant scale and reach to children and young people across the UK.

For further information or to obtain the 30-second film ‘Zombie Fairy’ and a short behind the scenes film to host, please contact:

The Creating Movie Magic resource is the first project in the new collaboration between film and education charity Into Film and the Industry Trust for IP Awareness, the leading body championing respect for copyright. Creating Movie Magic has been designed in collaboration with National Schools Partnership, and is supported by Cinema First and the Intellectual Property Office (IPO).

The BFI is investing £26m of Lottery funding over four years for Into Film to deliver a bold and visionary new film education programme, available to every 5-19 year-old and the 26,700 schools in the UK. The BFI’s aim is to create a single unified programme for watching, making and learning about film in order to safeguard and boost future film audiences through learning and appreciation of film and stimulate a new generation of filmmakers and film talent. The BFI is the lead body for film in the UK with the ambition to create a flourishing film environment in which innovation, opportunity and creativity can thrive by:

Aardman, based in Bristol (UK) co-founded and run by Peter Lord and David Sproxton, is a world leader in animation. It produces feature films, series, advertising and digital entertainment for both the domestic and international market. Their multi-award winning productions are novel, entertaining, brilliantly characterised and full of charm that reflects the unique talent, energy and personal commitment of the very special people who make up the Aardman team. The studio’s work is often imitated and yet the company continues to lead the field producing a rare brand of visually stunning and amusing independent and commercials productions www.aardman.com

About the Intellectual Property Office

The Intellectual Property Office is the official government body responsible for intellectual property rights in the United Kingdom. These rights include patents, designs, trade marks and copyright. Its educational campaign activities aim to provide young consumers with a better understanding of and respect for intellectual property through interactive campaigns, online games, teaching resources and competitions. For more information on the Intellectual Property Offices work, visit www.gov.uk/ipo